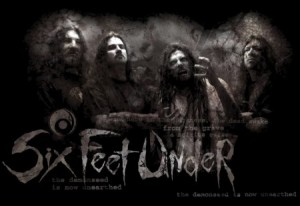 After 16 years with Six Feet Under, bassist Terry Butler and drummer Greg Gall have announced their departure from the band, with Butler joining Floridian death stalwarts Obituary on a permanent basis.
Butler comments; “As many of you know, I have been helping OBITUARY out on bass over the past year and now will be officially joining them as a permanent band member.
“Being in SIX FEET UNDER for 16 years, I have had the pleasure of meeting a lot of our dedicated fans and have made many friends along the way. I hope to see you out there!
“I wish nothing but the best for Chris Barnes [vocals] and Steve Swanson [guitar] in their future with SIX FEET UNDER.”
A live DVD, entitled ‘Wake The Night! Live In Germany’ has just been released in via Metal Blade Records.