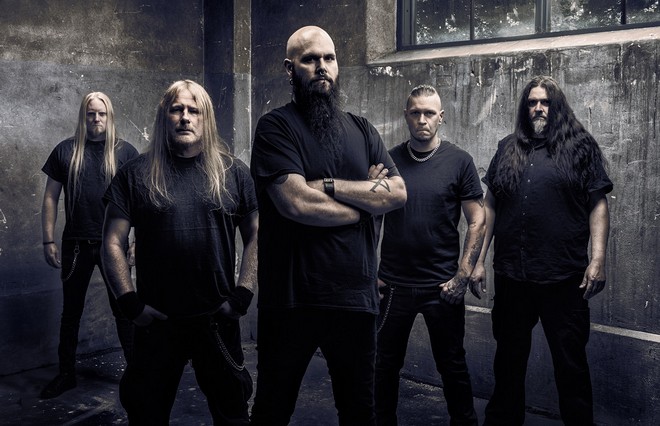 On 23 October 2020 Swedish death metalheads Demonical released their sixth album World Domination. To show the power behind their new compositions, the Swedes also released a video clip for the song ‘Slipping Apart‘.

Even though the old school quintet with new singer Christofer Säterdal (joined in 2019) and rejoined primordial drummer Ronnie Bergerstål hardly need any help in spreading their message, they invited vocalist Nils Patrik Johansson (Astral Doors) to provide some guest vocals for their song ‘Slipping Apart‘. As the song and the video clearly show, Demonical have not re-invented themselves, but stayed true to their roots and bones and deliver a classic Swedish death metal attack.

The sixth album World Domination will be released on 23 October 2020. The band has the following to say about their new compositions:

“So here we have it, World Domination; our sixth full-length album and the first one to feature [our] new vocalist Christofer Sätderdal and new-old drummer Ronnie Bergerstål. World Domination continues the same path as our previous Chaos Manifesto” slap, in other words, fierce HM-2 driven Swedish death metal, a ravage combination of brutality, melody and darkness. As always on every album, even this time we tried out some new traces and elements we haven’t explored before and have to say that we are stoked about the final outcome. When it comes to the production, this is clearly our most dynamic and vivid album so far. Not only did we use a different way of recording everything, we went also for a much more energetic and breathing sound closer to how albums were produced in the late-80s and early-90s. World Domination was recorded at a few different studios around Sweden, then mixed and mastered by Karl Daniel Lidén – a victorious collaboration we started with on our previous album.

Demonical recorded their sixth album World Domination at Glasuset and Sellnoise studios with the help of Johan Hjelm and Jonas Arnberg during June 2020. Karl Daniel Lidén (Bloodbath, Katatonia) took care of the mixing and mastering at the Tri-Lamb studios. The cover artwork was done by Susan Wicher.

More info about the band can be found on their Facebook page.