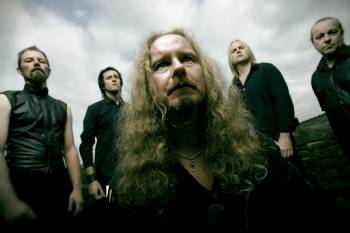 dropped off their planned tour with Arch Enemy, UK thrash veterans Sabbat have announced their first headlining tour in two decades. Talking to ZT guitarist / producer Andy Sneap comments, “We haven’t played since Donnington last year – that sounds good doesn’t it – and we were so looking forward to doing these Arch Enemy dates. Because getting this band together isn’t easy, we’ve got members all over the country, so to get together and start rehearsing is a lot of effort on everyone’s behalf. So we’d rehearsed for these Arch Enemy shows only to be told at the last minute that they were being rescheduled for November [due to flight disruption caused by the Icelandic volcanic ash cloud]. Everyone in the band was really wound up for doing these dates though, and it’s not as if we could just hop off to Europe or do some shows in America, there’s nothing like that going off for us. We were a bit despondent, so I was on to our agent asking them to get us even just a few shows over the summer at least. We couldn’t really wait until November, it was going to kill the band. Our agent didn’t get anything, so I ended up going to another agency who pulled it out of the bag for August.”

That frustration is shared by vocalist Martin Walkyer, who adds, “We got all rehearsed up, and then [the tour] was cancelled, which was really disappointing. People had taken time off work, and we’d ordered merchandise up…but you can’t stop a volcano!”
Although there have been a few shows strung together since the band reformed, Andy admits that doing a headline tour will be an unusual experience for the band. “Last time we actually did a tour was 20 years ago!” Andy chuckles. “No, we’re getting a bus, we’re not doing the van, not at 40-something! The bones will be aching and the singer’s going to be moaning by the end of it, ha-ha.”

Andy and Martin point out that the headlining tour shouldn’t be seen as an indication of new Sabbat material in the pipeline. “I’ve been concentrating on this Hell album that we’ve got finished now and have a couple of labels that are interested in it. I’m looking at that as me continuing music, really,” Andy explains. “The Sabbat thing, if I’m brutally honest, and I don’t think the other guys would mind me saying, the other guys really aren’t as in to it as I am and I’d rather concentrate on something where there is a bit more input from everyone. Martin’s got his own thing too and he’s heading in that direction. And we’re not the same musicians as we were 20 years ago, so trying to write that kind of stuff, I think it’d come out quite different. It’d still sound like Sabbat because of Martin’s vocals though. It might be interesting, and I’m not ruling it out and saying never but at the moment it’s not on anyone’s agenda.”
And of his project, The Clan Destined, Martin adds: “We’re just tracking the guitar and bass just now [on new recordings], me and guitarist Jackie Taylor. It’s sounding really good but to be honest with you I don’t know what to do with it as nobody’s buying CDs. Maybe internet downloads? I don’t know, we’re just testing the water really.”