We caught up with Psicorragia to see what keeps Peru’s blackened doom/death veterans alive and kicking.

“Our lineup has practically remained the same over the years. At one point a member retired, but he came back later. On drums though it was a definitive change; five years ago Teo Suchero joined the band. Since then, we have been the same old men,” says Mario of Peru’s Psicorragia. “We’ve been spreading South American death doom metal,” he adds. Since 1994 we should add!

If you’re wondering what Psicorragia’s version of blackened death/doom sounds like, then you need look no further than here as they featured on issue 079’s covermount CD, which you can listen to at this location. Have a listen yourself and see what you think, but here’s Mario’s interpretation of their output: “If we have to define it somehow, we would say that it’s death doom metal with some approaches to black metal. Our sound is reminiscent of yesteryear and it’s also ritualistic and dark. We identify ourselves as a band that dedicates its work to death.” And how does that translate lyrically/aesthetically? “Our compositions are a tribute to death. Likewise, the lyrical theme is also subject to this premise. We touch on different topics or stories in our songs, but they are always linked to death,” he stresses.

The track Psicorragia selected for our covermount, ‘Mons Tenebrarum’, was a one-shot way of introducing the band to ZT readers, so what made that particular track the one to put out? “It was hard to select the right song for the CD. Each song was composed to feel as though it is unique, therefore we have a lot of consideration for each Madremuerte’s album track. However, at that moment we were rehearsing ‘Mons Tenebrarum’ to play it live for the first time and that led us to select it. In this new album there are many raw and atmospheric death metal parts, but the singularity of ‘Mons Tenebrarum’ is that it encapsulates our ritualistic sound, that’s why we thought it was appropriate to show that side of our material.” 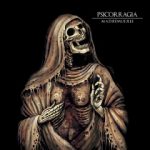 Which brings us to the album as a whole; given Mario explaining above that each track on 2016’s Madremuerte is meant to stand on its own two feet, so to speak, how do they go about composing? “The composition process begins in one of us, and then it goes to the hands of everyone in the band to make the arrangements. We wanted to take care in every detail in the Madremuerte’s long creation process. We recorded at home with our own equipment, except the drums which we did in a studio of a band’s friend. It seems that we are going to follow the same process for the new album. The mixing and mastering is handled by our keyboardist Antonio Duncan.”

Not many bands these days can stake a claim of being around for 23 years like Psicorragia have. They’ve seen tastes shift from one style to another over the years, but unlike some, they’ve stuck firmly to their own blackened doom/death formula. How do they see themselves in relation to their contemporaries through the prism of time? “We appeared in full effervescence of doom metal and when Florida’s death metal was still whipping the world; we also had South American death metal kicking our heads. Shortly after, black metal tinged the world and in that transition we were born – then our contemporaries were already somewhat ‘old’. Perhaps the difference with them was that we tried to strike a balance between both styles and that was noticed. Over time we have intensified our style, taking to extremes both sides that influence us.” And what are those influences? “We have the old cult albums of Morbid Angel, Death, Anathema and Moonspell. Also, great reference bands such as Mortem, Incantation, Autopsy, Unleashed, Acheron, Asphyx, and My Dying Bride.”

What about live rituals? “We have played many times in all these years, but we don’t do it continuously now. Recently we were the opening band for Mayhem and Acheron in their visits to Peru. We have also played at the Lima Metal Fest, the biggest festival here that brings bands from all over the world.” So what’s next for them? “We are talking with our record label about the possibility of producing our first live DVD of the concert we had with Mayhem that was recorded with multiple cameras. But what’s definitely going to happen is the release of our next album in 2018; we are finalising details for the recording and our idea is that, just like the Madremuerte album, we make an edition for America and another for Europe.”

Connect with Psicorragia:
www.psicorragia.com
“If you are a death worshipper, meet us on the road. Follow us on our Facebook fanpage in psicorragia.com. You can also find us on Bandcamp and Spotify. You can buy the physical album in Aesthetic Death, MFL Records, Solitude Prods, Legion of Death, Unholy Fire Recs, among other stores in Europe.”