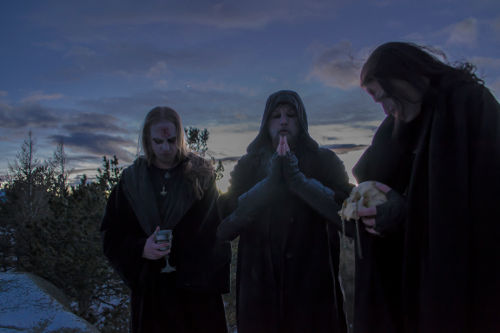 Black metal cacophonists Nightbringer are back with a new album! The follow-up to 2011’s Hierophany of the Open Grave, Ego Dominus Tuus, will be released on CD on 26 September 2014 (30 September in North America) via Season Of Mist, while Daemon Worship Productions will release it as a double LP.

Nightbringer were formed in 1999 as “a conduit for the contemplations on the mysteries of death as it is understood in the tradition of the art magical” as the press release describes it. Their fourth album promises to continue in the tradition of dark, malicious, orthodox black metal they have refined over the years.

On the new opus, the band states: “Nightbringer is extremely proud to unveil our latest album, Ego Dominus Tuus, an undertaking almost exactly one year in the making, from first compositions to the final day of mastering. Ego Dominus Tuus represents the path of ordeal, from the transformative Fires of the Art within the crucible of the underworld, to the revelation of the Daimon to the Guardian at the Threshold and slaying Sun of Death, Light of Lucifer, all contained within the enigma of a sacred name.”