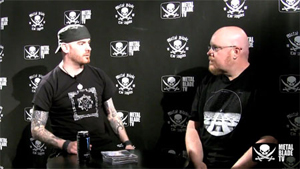 Primordial’s Alan Averill ‘Nemtheanga’ has inked a distribution deal with Metal Blade for his record label Poison Tongue Records, immediately signing two bands: Darkest Era (Northern Ireland) and Portrait (Sweden). Nemtheanga said: After twenty years experience in the music industry I am starting my own imprint label called Poison Tongue Records through Metal Blade Records, working in conjunction with Darragh at Invictus Productions and Cyclone Empire. The reasons are many fold and despite the confused state of the industry itself is in, I felt it was time to step up and make a few things happen. Poison Tongue will be underground – make no bones about it.” Nemtheanga’s project Blood Revolt will be the label’s first release, followed by a new 7″ from Aussie warmasters Destroyer 666, to be co-released by Invictus. Metal Blade CEO Brian Slagel said: “We are very excited to work with Alan on this project. He has great ears and is really embedded in the underground.” ZT congratulates Alan (also a magazine contributer) on his big win!