Metropolis Music has done it again. In association with Mythology, Live Evil comes to London for a weekend of total, unadulterated mayhem.

Hailing from all over The Isles and beyond, several hundred fans invade London for one of the most unique indoor festivals of the year. The Garage is the perfect venue, boasting two stages, killer headliners (only UK show for recently reformed Satan), a great mix of support and a mini-metal market!

It’s early afternoon as the gathering begins outside; many are those who bear a hangover shaped scar, no doubt recovering from the previous night’s warm up with Antichrist and Deathammer. No regrets. Doors open at 3 pm, just in time for UK based Bastardhammer who kick the event off with their unstoppable sound. Perhaps due to their shortened set, and despite singer John Retardy’s non-stop blasts, Bastardhammer fail to raise the temperature as expected. The atmosphere does not feel evil enough, not yet at least.

Next on are Eliminator, bringing their blend of heavy metal thunder. They’re a talented bunch, but they’re just not right for this event.  It’s up to French putrid death metallers NecroWretch to break the trend. It’s hard to believe that three guys can sound this huge! Singer and guitarist Vlad, bassist Amphycion and heavier-than-hell drummer Executor sound deadly, violent. Blastbeats and crusty vocals abound, and the crowd shows the first signs of their insatiable hunger for destruction, descending into a relentless moshpit.

NecroWretch prepare the ground perfectly for one the most anticipated bands of the day: Finland’s Beastmilk. As soon as frontman Kvohst stomps on stage, the cheering becomes uncontrollable. The trippy, dreamy reverie that their apocalyptic post-punk induces suddenly detonates, igniting all senses. Beastmilk nail it from the beginning to the end. They are definitely a band to keep an eye on, and their forthcoming debut full-length, Climax, should be on every metalhead’s wish-list.

Hailing from Sweden, Vampire are hardly visible throughout their strangely cryptic set. The trio, aided by two additional live musicians, is surrounded by a ghastly cloud of thick red fog. It’s captivating at first, but soon chokes their sound, and the experience.

It’s now Pentagram Chile’s turn to keep stoke the fire and, as expected, they do an amazing job. On stage, frontman Anton Reisenegger is the emblem of pure, extreme metal at full force. Pentagram Chile have been around for nearly three decades (recently changing their name from Pentagram to avoid confusion), remaining one of the best thrash/death bands of the 80s. Their influence is felt as far as At The Gates and Napalm Death, but tonight it’s all about celebrating them. Vocals perfectly melt into spine chilling riffs in the musical vortex. After a grand rendition of ‘Spell Of The Pentagram’ and ‘Temple Of Perdition’, there is a rush towards the merch table; grabbing Pentagram Chile’s first full length album, The Malefice, which has just been released, is evidently necessary. 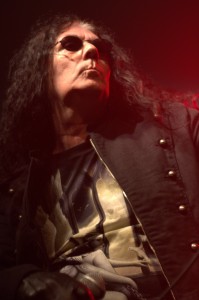 The end comes with Satan, and their captivating supremacy confirms their position as today’s headliners. Wearing the darkest attire and sunglasses a’ la Carl McCoy, Brian Ross marks his presence as the un-deletable frontman, kicking the show into gear with a lethal mix of adrenaline and screams. His piercing vocals perfectly blend into the spine chilling duel between guitarists Russ Tippins and Steve Ramsey in The Trial By Fire and Blades Of Steel. Pure damnation. The Live Evil slogan says it all: Still no sponsors, still no masters! Bring on 2014!