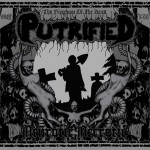 The mastermind behind Putrified, A. Death, issued ZT with the following statement: “‘Neurotic Necrotic’ is more of an album than ‘Spawn Of The Dead’, both in terms of music and lyrics. In these days of mp3’s I think that it’s important to bring back the thought of an album as an entity and not just a bunch of single songs thrown together.
Lyric wise the album has a tale that is told throughout the album, from the first to the final track (King Diamond style). When it comes to the music itself I would say that this album has a lot more groove oriented riffs than the first album. Expect necrotic metal of death and decay!”

“Neurotic Necrotic” is slated for release next month via Poland’s Hellthrasher Productions.