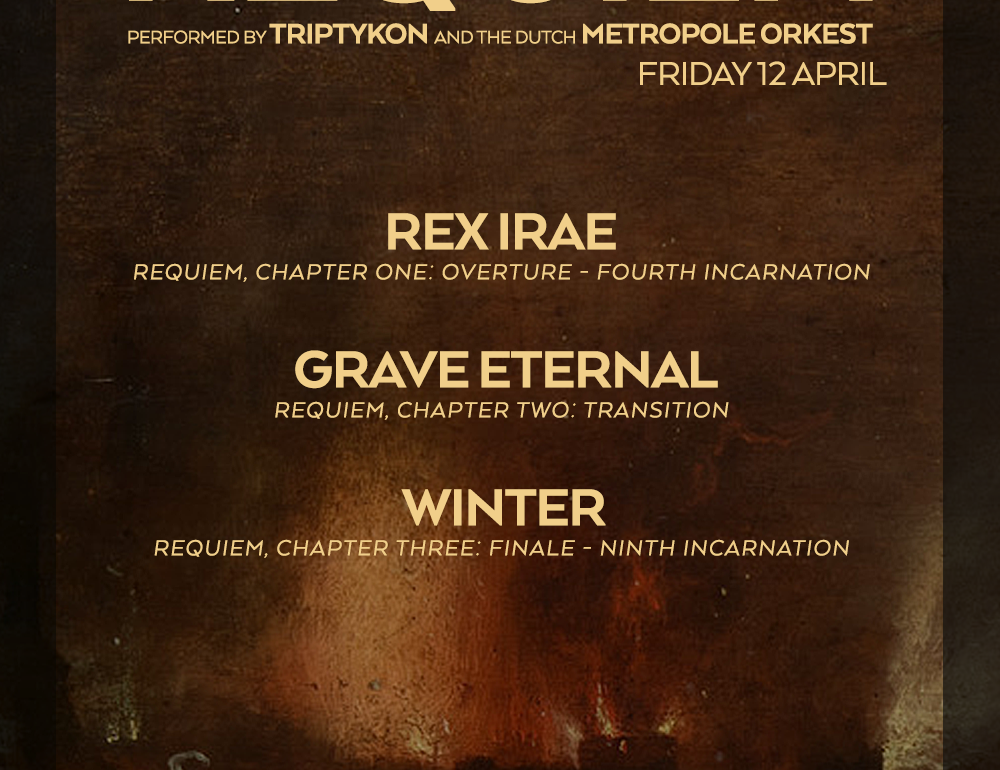 Triptykon and Roadburn collaborate in the completion of Celtic Frost’s unfinished Requiem.

Who could explain the headline better than Tom Gabriel Warrior himself:

“In autumn of 1986, when I was 22 years old, I began writing what would become the first part of an intended three-part Requiem (missa pro defunctis; i.e., mass for the dead). The finished piece was released on Celtic Frost’s Into The Pandemonium album, in June of 1987, bearing the title ‘Rex Irae’.

As we were rehearsing and recording the first part of the Requiem, we couldn’t have foreseen that exactly such non-traditional, experimental work would lead to significant differences of opinion between the group and the label who had signed us at the time. We were still an underground band and at a pronounced disadvantage, as our industry power and resources were very limited.

We had initially intended to finish the two missing parts of the Requiem after touring the album, and to release all three sections of the Requiem on a dedicated EP as early as 1988. The aforementioned conflict with the label spiralled out of control, however, leading to the termination of the original group at the end of 1987.

When Martin Eric Ain and me resurrected Celtic Frost in 2001, finishing the Requiem was among the earliest topics discussed. In 2002, at age 38 and sixteen years after I first worked on the initial part, I began writing the third part on the basis of demos I had recorded in 2001. The finished third part was released on Celtic Frost’s Monotheist album in 2006, under the title of ‘Winter‘.

What was left now was to complete the missing second part of the composition. I had quite a detailed idea in my mind of what it would entail musically, but there was no hurry attached to it; we had reformed Celtic Frost to record far more than just one album. Alas, perhaps predictably Celtic Frost disintegrated again after a few years, and the Requiem was left unfinished once more.

Nonetheless, the intention to finish the full Requiem remained with me. I was going to do it one distant day with Triptykon, the group I formed to continue to pursue the path I began in Hellhammer and Celtic Frost. It was 2018, yet again 16 years after I last worked on the Requiem, when Walter Hoeijmakers, founder of the legendary Roadburn Festival and one of my most beloved friends, contacted me to propose Roadburn as the venue to perform, at long last, the finished Requiem. Walter and his team very kindly provided for the resources necessary for such a substantial undertaking, and so, at 5, I found myself commencing work on the second and thus final part of the Requiem this year.

The three parts of the Requiem will therefore be performed by Triptykon at Roadburn 2019, with full classical orchestration, congregated specifically for this occasion by Florian Magnus Maier, who is our esteemed classical collaborator and arranger in this project, and whose patience with me appears to be limitless. We feel very proud and deeply honoured to be joined in this endeavour by the renowned Dutch Metropole Orkest. Moreover, this project has been made possible due to the generous support of the City of Tilburg and Brabant C.”

So dear reader, surely this is as good a reason as any to venture along to the 2019 installment of Roadburn next April? The lineup is bloody brilliant (and if you’re a ZT reader (which of course you are, right?), it’s probably one of the closest festivals to us in artist terms) – you can view the lineup so far right here at this location.