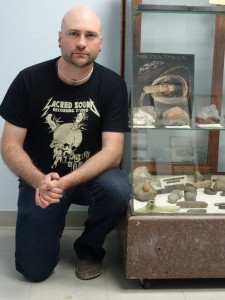 Nechochwen’s latest album, Oto, features in the Native American display of the Brooke County, West Virginia, Museum. Oto found a place there on 18 May 2014 and will soon be followed by Nechochwen’s previous albums, Algonkian Mythos and Nezimuths To The Otherworld.

Nechochwen were formed in 2005 in West Virginia and label their music ‘Apalaci Folk Metal’. Stylistically, they sit some place between classical guitar driven folk, heavy metal, and black metal; their lyrics deal with indigenous American heritage and traditions.

The Brooke County Museum of West Virginia includes Nechochwen’s 2012 album Oto among its exhibits as of 18 May 2014, while the other two albums will follow shortly. “We are honoured” the band states. “All three albums have a connection to places, events, or people in Brooke County”.

Multi-instrumentalist and singer Nechochwen tells ZT: “The curator of the museum is a lady named Ruby. As I was leaving there, I told her I was honoured that she would feature this record alongside ancient tools, weapons, pipes, etc. of our local Indians, ancestors of mine and many others in the area. I said that I wrote the music to honour our area and its heritage. She said to hold on to our history, or we will lose it. It seems many people are uninterested until you engage them in things that actually happened and ways of life that may be much better than how we do things today. She is going to feature Nechochwen recordings and other recordings I have of local Shawnee, Lenape, and Cherokee songs for a series of guest lectures by Native elders. This is the kind of thing I set out to do when I started releasing music as Nechochwen.”