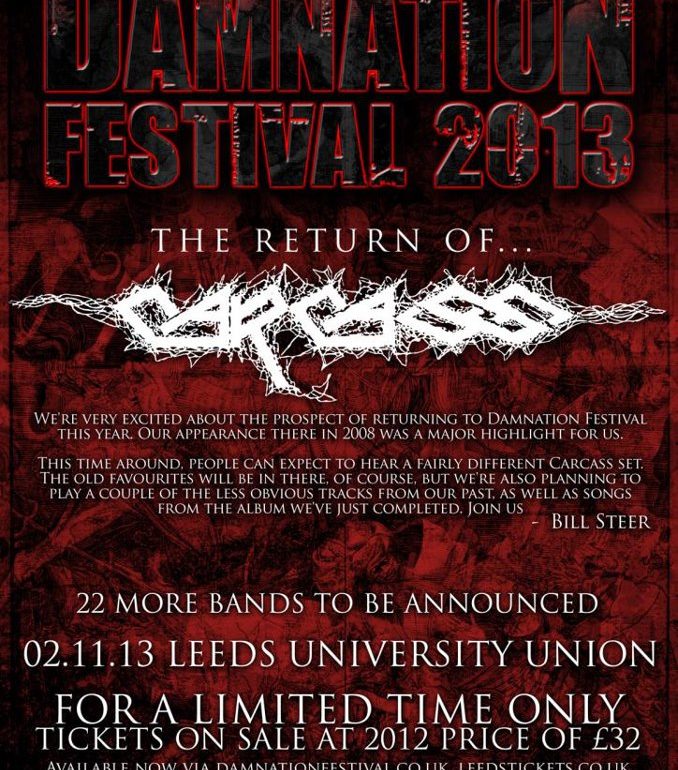 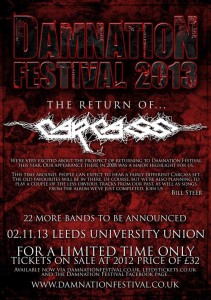 Hot off the heels (yes, I just used that phrase) of the news that the goregrind pioneers Carcass are to release a new studio album, the band will also headline the 9th edition of Leeds’ Damnation festival.

The fest announced yesterday that Carcass will bring the flesh ripping sonic torment to Damnation 2013, with the band promising a unique set of tracks off the new album, as well as some “less obvious” songs from past albums.

Guitarist Bill Steer commented: “We’re very excited about the prospect of returning to Damnation Festival this year. Our appearance there in 2008 was a major highlight for us.
.
“This time around, people can expect to hear a fairly different Carcass set. The old favourites will be in there of course. But we’re also planning to play a couple of the less obvious tracks from our past, as well as songs from the album we’ve just completed. Join us!”

The appearance will mark the psychopathologists’ only UK show following the release of  the new LP, their first in 17 years.

With 22 more bands to be announced across three stages, festival director Gavin McInally, said fans can look forward to the “melting pot of diverse styles of music Damnation Festival is known for from black metal to post-rock”.
.
He added: “It was a coup to land the first UK Carcass show in 13 years in 2008 when fans snapped up every ticket going before we made it to the day itself and it’s another coup having the band return following the release of their first new album in 17 years.  But even with the mighty Carcass topping the bill, we won’t be satisfied until we’ve pieced together a more challenging and brilliant day of music than the eight successful years we’ve already had the pleasure of hosting, so expect a lot more to come from 2013.”