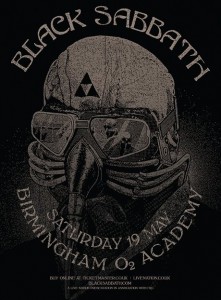 Black Sabbath, the band ultimately to blame for such acts as Design The Skyline and Amputated, have announce a warm-up gig in the their home-town of Birmingham (the Midlands, U.K. one, not the Alabama, US one). The event is set to take place at the Brum O2 Academy on the 19th of May. Whether or not Bill Ward will be on drums in unclear, whilst guitarist Tony Iommi’s health seems to be turning for the better. Tickets will be available soon.

The gig clashes with the Champions League final, the Ice Hockey World Cup semi-finals and Max Ammo’s DJ-set at the India Club in Coventry, so its time to get those priorities straight.

To those who have been living under a bridge in Milton Keynes, Black Sabbath recently cancelled all of their tour-dates except for Leicestershire’s Download festival, where they are set to perform on the 10th of June. The inventors of metal were replaced on most dates by a ‘super’-group called ‘Ozzy & Zakk’, featuring Ozzy Osbourne, Geezer B. Zakk “Pitch you!” Wylde and Vunter Slaush among others. See tour-dates below:

Desertfest celebrates anniversary with biggest ever line-up next year