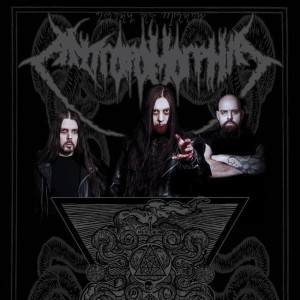 Dutch, occult (and somewhat controversial) death metallers Antropomorphia have enlisted the help of a second six-stringer into their ranks. The band, who has recently been under fire for their latest offering ‘Evangelivm Nekromantia’ from German BPJM (‘Federal Department for Media Harmful to Young Persons’) has recruited guitarist Jos van den Brand into their blackened horde. The band comments:

“After an extended journey through the mazes of darkness a new fire has been lit to illuminate our ritual masses. We are proud to announce that we’ve welcomed a new member to our nekromantian horde : J. (full name Jos van den Brand) is an experienced guitar player who we know for many years and played in several prestigious Dutch (death) metal acts since the early ’90′s. With J in our presence the preparations have begun to open the portals and to set ablaze every stage that comes on our path/journey.”

Regarding their recent troubles with the German BPJM (which included an indexing request for ‘Evangelivm Nekromantia’ as well as some strong criticisms of its artwork, song titles and lyrical themes) the band responded:

“We’ve made certain people nervous and uncomfortable with our music and lyrical content. In order to ‘protect’ the children, it’s quite possible ‘Evangelivm Nekromantia’ will be banned and removed from German stores. Through their ridiculous and hypocrite way of thinking they are not letting people use their own intelligence or freedom of choice, this in an era where you turn on the news and see the world’s vile and repulsive excrements in full HD. These people are nothing more than a bunch of pitiful sheep! They might think this ban will be castigation but it will only strengthen us in our opposition towards these sad shallow people that crowd the world with their insignificant lives. To us, it’s the perfect representation of people without perception other than a retarded opinion about an artistic expression.”