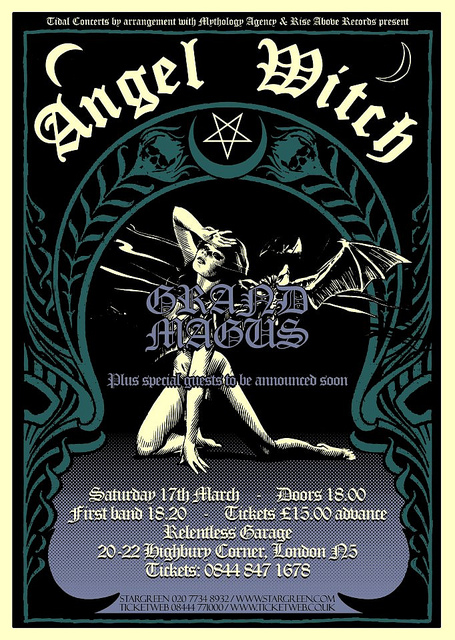 ZT spoke to NWOBHM legends Angel Witch ahead of their London show in March this year.

Considering Angel Witch are from London, are London shows special to you?
[Kevin Heybourne’s answer] A lot of time has elapsed since I was excited about anything, including gigs.

Can you tell us anything about the show? Any songs you’re tipped to play (aside from ‘Angel Witch’, of course)
We will be playing about 3 tracks from the new album, ”As Above So Below” as well as most of the first album, as well as compilation tracks and b-sides.

Why did you choose Grand Magus as support? What’s your relationship with them?
Grand Magus are a great band. Our paths always crossed at various festivals last Summer & we always played a day before or after, but the last time we shared a stage was at MuskelRock in 2010, so it will be an honour to share the stage with them again.

.
Can you give us a cheeky hint as to who the special guests of the show are?
Could be another band from Sweden…

.
Following the gig, what’s next for the band? Is there any other news or announcements in the Angel Witch camp?
Summer festivals, more club shows…

Angel Witch will play The Garage in London on March 17th 2012.