VOMITORY TO DISBAND BY THE END OF 2013 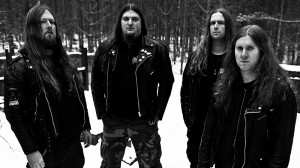 Swedish brutal death metal crew Vomitory have announced that they will be calling it quits by the end of 2013, after a 24 year streak of annihilating eardrums. A statement on the band’s official site comments:

“After 24 years, eight albums and hundreds of live shows across 30 countries, we have finally come to the end of the road. We in the band – Tobias, Urban, Erik and Peter – have made the collective decision to end Vomitory by the end of 2013. It has been a blast on all accounts, but all good things come to to an end, and for Vomitory it is now.”

“We will still play as many shows as possible during 2013, and we hope to see as many of you fans as possible there, so we can thank you for your true support during all these years!”