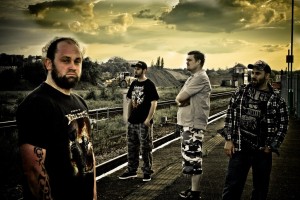 In 2011, born of a splinter group from A Horse Called War, a new diverse metal force simply known as Coronach emerged.  Fuelled by a relentless drive for perfection, these four blokes from East Anglia banded together and hit the studio.  With their self-published debut, ‘Mountain Kings’, they take influence from every direction in metal and make music without producing standard genre-crossing mediocrity and calling it ‘progressive’; these guys bring it hard, they bring it fast and they bring it good.  ZT sat down with the Coronach chaps and talked about the music, the live experience and the future.

Zero Tolerance: You guys classify yourselves as “diverse metal”, and it’s clear in your music that you blend a lot of styles together; are you going to continue experimenting with everything, or are you looking for a sound that is definitively “Coronach”?

Coronach: Our style is really quite eclectic.  Our latest stuff tends to have a more uniform, solid sounding, but is still quite spontaneous in the way we approach it.  So it’s a bit of both really.

ZT: What sets your music and your musical style apart from other bands of the genre like Lair of the Minotaur?

C: None of us are really into that metal at the moment, you know what I mean?  I think we kind of stand out on our own because we are our own style.  We don’t ever conform to what anybody says we should.  It’s just how it is, it’s how it happens.  We literally just play what we want to play, what we enjoy playing.  We just make sure we do it really well.  Duke Ellington said “there are two kinds of music, the good stuff and the other stuff.”  We just make sure we play the good stuff, as good as we can.

ZT: A good policy to have.  What kind of lyrical themes do you explore in your music?  Are they as varied as the styles, or are you going for a concept?

C: All the lyrics… when I write them, they’re varied.  We’ve written songs like ‘Mountain Kings’, where it’s obviously about Charles basically; it can be something as farfetched as that to something a bit more serious like in ‘The Shades of Tyranny’ where there’s a little bit more of a political edge to it.  Other than that, I’ve mentioned a few song titles to the other guys in the band and to be honest, they’re not the kinds of things you could use in polite conversation, and most of it I wouldn’t want to repeat.  To actually write lyrics along with it is difficult for me.  It’s been a real challenge writing with these guys because everything is so fucking mad.  You turn up to practice and everything’s proper crazy and to try to write lyrics to it has been a proper challenge, which is good.  I enjoy it.

ZT: Brilliant.  Have you thought about doing a concept for a future album, or are you going to keep it spontaneous?

C: What, like a Rush concept album?  Or a little heavier than that?

C: If it’s anything like Cradle of Filth, then no!

A concept album would be awesome though.

ZT: Who would you, as a band, consider to be your biggest musical influences?

C: Everything and anything, literally.  As long as it’s got a groove, a pulse, a rhythm, it’s a contender for what we do. If it’s got any relevance, then that’s an influence basically.

ZT: What is the creative process behind the tracks?  How is a Coronach song written?  Is it a group process or does it happen individually?

C: Definitely a group process; it’s a democracy here.  We all have ideas and we bring them to the table, and if we think it’s good, we’ll run with it and if not, it goes out the window.

We don’t ever go “look, I’ve got an opening riff” then just use it.  Sometimes we’ll write a riff and I’ll be like “ah, you know what?  That’s a great mid-late.”  Then we build a song around that, and sometimes we’ll go “that’s a great end riff,” and then stick it at the beginning to see what happens.  You know, shit like that.  As long as it’s all agreed on, as a band, that’s cool. It’s how we write.  It’s a democracy, that’s how it works.

ZT: What does the name “Coronach” mean?  Are you guys massive Jethro Tull fans, or is there some deeper meaning.

C: *laughs* Only two of us, but yeah we are fans. It’s different for everyone really.  I mean, Coronach is a funeral hymn.  So it’s personal not just for individuals, but for everyone as a whole if that makes sense.

We like to think we write songs for everyone, for them at that moment in time.

ZT: Right…  You recorded your debut album ‘Mountain Kings’ at HVR Recording Studios in Ipswich.  What’s it like to record there?

Yeah, it’s great.  We had a good time there, a real good experience.

They’ve got a tuck shop.

We ate our body’s weight in mars bars and snickers.

It’s really good, it’s relaxed.  It gets the best out of you while at the same time being relaxed.  We got to chill out and relax, but also we got to make an amazing album and then make it sound great.  It wasn’t like “you’re doing it right!  You’re doing it wrong!” it was always more like “you need to try it this way or that way and it’ll sound better.”   It got the best out of us.

It’s like, they just looked us straight in the eye and said “you could do better.”  And we did.

I think that’s how it is.  Everyone should go there.

ZT:  For a new and relatively underground band, you’ve been getting a lot of attention.  Has there been any label interest?

C: Er, none so far.  But we’d love to do it as soon as possible, that would be great.  It would be great to have that support.  But like you say, the response has been really quite fantastic in that time; it’s great to have people appreciate what we do.  It’s really great… everybody is so different, but they kind of understand in a way what we do.  We really love that, it’s great. 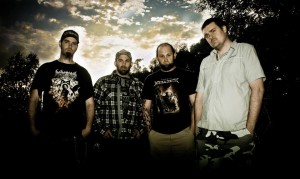 ZT: In as much as in March, Christmas is around the corner, festival season is nearly here.  Have you got any festival interests, such as the New Blood stage at Bloodstock?  And if you could pick a festival to play at, which would it be?

C: Anywhere continental with a holiday would be nice!

Somewhere not shitty and raining.

I think if we went for a festival, it would have to be Bloodstock; I mean, that is the one to do.  We’ve tried to do the Metal 2 the Masses thing a million times, but you know…  just any chance to play there would be amazing.

I mean, there are other great stages too, like Hellfest and Wacken, that one on the boat.

ZT: Would definitely be cool to see you guys at a festival, but what is the Coronach live experience?  What makes a Coronach gig unique, and where are you thinking of playing next?

With a twist of lemon!

As for gigs, anywhere and everywhere.  We’ve got two babies due in the band soon, so we’re trying to take a little step back to work things out around that.

C: Yeah, thank you very much.  The boys have been busy, what can I say?  The girls actually like us!  Funny that!

Yeah, we’re just going to keep December free and then we’ve got five gigs coming up in London, Norwich, Colchester; we play anywhere.  If there’s a chance, we’ll do it.  It’s hard economically at the moment, so we always say if someone wants to help us out, we’ll help them out.  It’s a two way street.

ZT: Fair play.  Just to wrap up, is there anything you’d like to add?

C: Come and check us out online, come to a show, come and have a beer.

We don’t look it, but we’re actually alright!

We look like the most menacing band ever, but actually we’re all really really nice.

We’re all lovely people and love to chat.