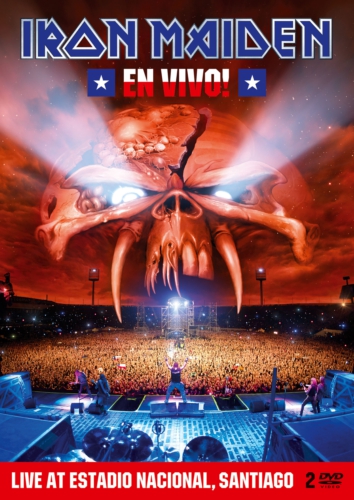 Founding member Steve Harris says:  “For ‘The Final Frontier Tour’ it was really important to me that we filmed in South America as we’re always so overwhelmed by the fans’ reaction when we go to that part of the world and I wanted to reflect that in the filming. After much consideration, we chose the Santiago show as we felt it was one of our best performances of the entire tour and to play at the prestigious Estadio Nacional was a landmark moment for us. For reasons known to our fans, it took a long time before we got to play our first show in Chile, and once we did get to play a show, the response was so phenomenal we just had to keep coming back and it’s got better and better each time! This show also features the gigantic new Eddie. He wasn’t due to make his appearance until our European leg of the tour later in 2011, but we managed to transport him across the sea in a special huge container just in time for the latter end of the South American dates so it was great we were able to immortalize him for the DVD as he really has to be seen to be believed!”

The concert was filmed using 22 HD cameras as well as a flying camera to perfectly capture the high energy that Chilean Iron Maiden fans exhibit.  The sound is available in stereo as well as 5.1 audio and was mixed by Kevin ‘Caveman’ Shirley, who has a long history with Iron Maiden.

View the trailer for the DVD HERE