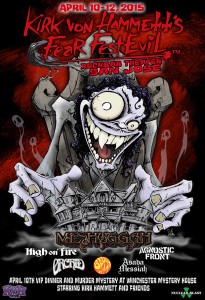 Following last year’s successful launch of Fear FestEvil, organizer and Metallica guitarist Kirk Hammett is gearing up for the second instalment. This year’s festival will be held on April 10, 11 and 12 in San Jose, California.

“Kirk Von Hammett” as he is known for this event “loves to keep things interesting, and so it is that the next Kirk Von Hammett Fear FestEvil event will be a Murder Mystery Dinner/ VIP Party at the legendary Winchester Mystery House in San Jose, CA on Friday April 10th, followed by another spectacular two-night Fear FestEvil musical punch at RockBar Theater on Saturday 11th and Sunday April 12th” the press-release reads.

“On the 10th, guests attending the Fear FestEvil VIP Party will enjoy a classic night of ‘whodunnit’ mystery madness, dining alongside Kirk Hammett, touring the infamously eerie and atmospheric mansion, and trying to figure out who killed who! Guests can expect twists, turns and clues from some very special ‘horror royalty’ as they try to crack the mystery open.”

If this all sounds too Scooby Doo for you, fear not – the festival actually involves great music, alongside Hammett’s innumerable horror memorabilia ! Appearing on stage this year will be psychedelics Blues Pills, thrashers Asada Messiah, doom rockers Orchid, hardcore punks Agnostic Front and metal-to-the-bone heroes High On Fire, with perverters of the beat Meshuggah headlning.

Tickets go on sale on 12 January 2015 (that is today) so keep an eye for them at http://www.ticketweb.com/t3/sale/SaleEventDetail?dispatch=loadSelectionData&eventId=5588465&pl